Numerous documented examples have been published of adverse effects of endocrine disrupting-chemicals (EDCs) in invertebrates, fish, wildlife, domestic animals, and humans.1 Various anthropogenic chemicals can disrupt hormonal systems, but pathways and targets for endocrine disruption extend beyond the traditional estrogen / androgen / thyroid receptor-mediated reproductive and developmental systems. There are new concerns about the potential role of EDCs in increasing trends in early puberty in girls, obesity and type II diabetes in the US and other populations, including alterations induced by mixtures of chemicals (potent human and veterinary pharmaceutical products, personal care products, nutraceuticals, phytosterols).1 In crustaceans, the effect of EDCs such as organic pollutants and some pesticides is to inhibit molting by interfering with ecdysone at target tissues.2 The heavy metal cadmium (Cd), a human endocrine disruptor, inhibits some ecdysone secretion in crustaceans. Xenoestrogens, juvenoids and ecdysteroids, have produced abnormal development of male and female secondary sexual characters, and alteration of the sex ratio. Cd and copper (Cu) interfere with hormones that stimulate reproduction, such as methyl farnesoate, as well as with secretion of the gonad inhibiting hormone, therefore affecting, for example, ovarian growth.2 Some heavy metals produced hyperglycemia in crustaceans during short times of exposure; while a hypoglycemic response was noted after longer exposures, due to inhibition of secretion of the crustacean hyperglycemic hormone.2 In penaeid shrimp, little information is available on the role of EDCs on growth, reproduction and immunity. Data are lacking to inform regulatory agencies about the need to screen and test EDCs in fish and shrimp meal. Baseline information on heavy metals, PCB and PAHs is being collected from wild and cultured shrimp through our IMSEGI project. Low levels of Cd were found in wild and cultured Litopenaeus vannamei of Ecuador and USA and Penaeus monodonof Philippines.3 Other reports showed Cd values ranging from 0 to 2.27 ppm in tissues at various stages of shrimp development3, some of which were above the recommended safety limits of 0.50 mg/kg (ppm) set by the EU4 and FAO5 and represent a risk to animal and public health. Cd LC50s (48h-30days) ranged from 0.124 to 5.500 ppm. In this review, levels of 15 metals in wild L. vannamei broodstock from three sites of Ecuador and one of El Salvador (Table 1) will be used as a case study to highlight that EDCs physiological actions are at concentrations below 1 ppm. There were differences (P<0.05) among the four sites for 10 of the 15 metals (Ag, Al, Cd, K, Hg, Pb, Mn, Ni, Se, V). Some metals have the potential, at very low levels, to impact not only reproductive and immune response systems but also genetic diversity and fitness. Research is needed to determine the EDC effect of metals and POPs on shrimp and human health - the information should contribute not only to conservation of shrimp biodiversity but also to the development of a sustainable aquaculture industry.

Department of Environmental and Population Health, Tufts University School of Veterinary Medicine, North Grafton, MA 01536
Natural populations of L. vannamei shrimp are threatened by loss of habitat, pollutants and diseases. These environmental pressures may be impacting the genetic diversity and disease resistance characteristics of L. vannamei and other marine species. To develop a sustainable shrimp aquaculture industry and protect wild shrimp populations and their habitat, baseline information on presence of pollutants, prevalence of diseases and gentetic diversity is needed. Working towards this goal, we have begun development of a database of pollutants (heavy metals, PCBs, PAHs) present in L. vannamei and P. monodon1.  The aim of this study was to examine the trace concentrations of 15 metals in L. vannamei broodstock.
L. vannamei broodstock from Ecuador and El Salvador were maintained under similar environmental conditions in a culture pond for breeding purposes. Ten samples from each of three regions of Ecuador (Esmeraldas, Manabi and Guayas provinces) and from El Salvador (n=8) were analyzed for: aluminum (Al), antimony (Sb), barium (Ba), cadmium (Cd), chromium (Cr), copper (Cu), iron (Fe), lead (Pb), manganese (Mn), mercury (Hg), nickel (Ni), potassium (K), selenium (Se), silver (Ag) and vanadium (V).
All 15 metals were present in adult L. vannamei. The range of trace concentrations, µg/g (ppm) on a fresh weight basis, varied among samples within and among sites. The concentrations were as follows: Al (0.2 to 8.0), Sb (0.004-0.009), Ba (0.04-0.77), Cd (0.046-1.066), Cr (0.22-1.48), Cu (3.48—22.69), Fe (2.0-20.00), Pb (0.006-0.195), Mn (0.12-0.74), Hg (0.014-0.250), Ni (0.007-0.357), K (2458-3383), Se (0.18-0.53), Ag (0.014-0.128) and V (0.12-0.33). For each metal, the mean concentration was calculated and used to rank the regions from highest to lowest. Analysis of all 15 metals showed that shrimp from Guayas ranked first in the number of metals with highest concentrations (10 out of 15), followed by El Salvador (4 out of 15), and Esmeraldas (1 of 15). Broodstock from Manabi ranked the lowest (9 out of 15) in trace metal concentrations. Shrimp from El Salvador had the highest trace concentrations for four (Cd, Hg, Cr, Ni) metals of great health interest.
Some of the heavy metal concentrations reported here have the potential to impact not only reproductive and immune response systems but also genetic diversity in wild L. vannamei.  A monitoring system based on habitat status, population genetic structure, disease prevalence and pollutant load in wild shrimp has been initiated.  This information should be useful to managers of both the natural shrimp resource and shrimp breeding programs. 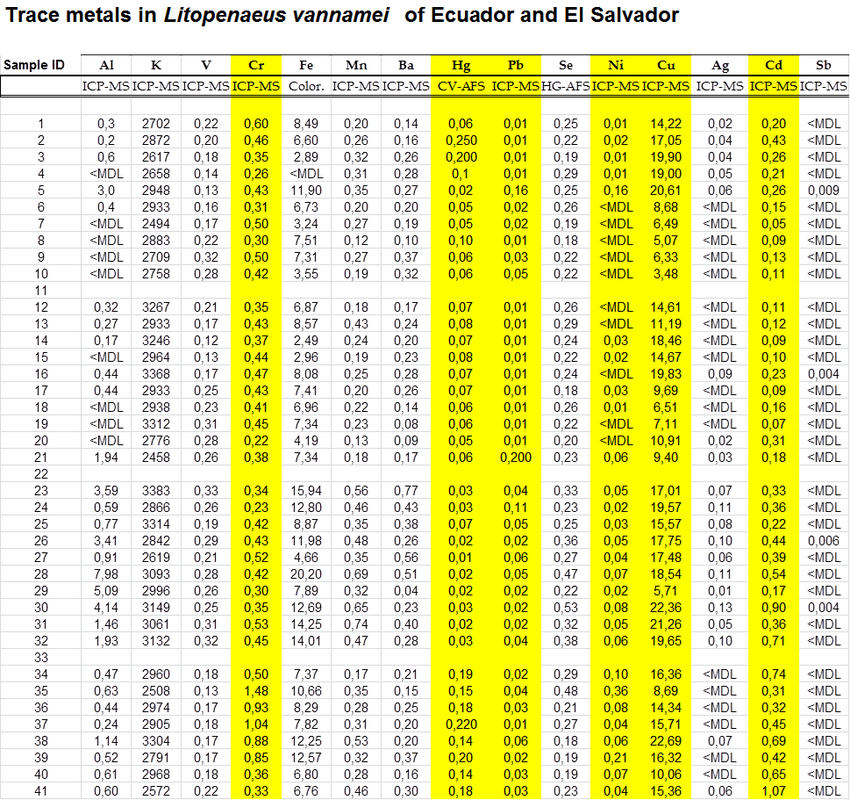